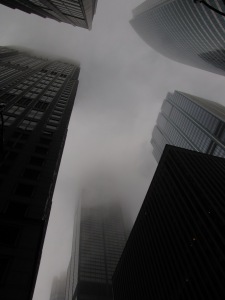 We don’t get a whole heck of a lot of fog in Chicago’s downtown area due to the wind currents disruptions and amplifications while passing through all the tall buildings. Normally the lake fog rolls in over Lake Shore Drive and hovers there or a block in before dissipating, not so this fine morning. I had gone downtown to meet with a friend from the suburbs and we ended up walking the full tour of the Loop just to look at the fog.

Fog in the city is interesting, since it is closest to the ground by the lake, but as you travel away from the lake it rises up. This view is from Wacker Drive, about a block north of the Sears Tower and just 4 blocks east the fog was about 10 stories lower. The distance view (which I was unable to photograph) was pretty cool, you could see the fog lifting up and blowing away as low level clouds.

I had some difficulty with light, which you might expect when shooting black and grey buildings in a fairly dense fog and no tripod, but I think I acquitted myself fairly well, all things considered.

This entry was posted on June 23, 2011 by DustMote. It was filed under Chicago and was tagged with Chicago, light, photo, photography.