The Palace Theater- Part The Entryway

There are buildings that can be rehabilitated, and buildings that are simply waiting their turn for the wrecking ball, the Palace is in line for the latter.  The interior has been torn apart by scrappers, there is no trim left on the walls, just one sad heap of of small scrap left by the ticket taker’s booth.  The wood is crumbling, the walls are collapsing without the benefit of help and I am frankly shocked the roof is still mostly intact.  It isn’t in as bad of shape as St. John’s Hospital, but that is only because so far it has avoided being set on fire. 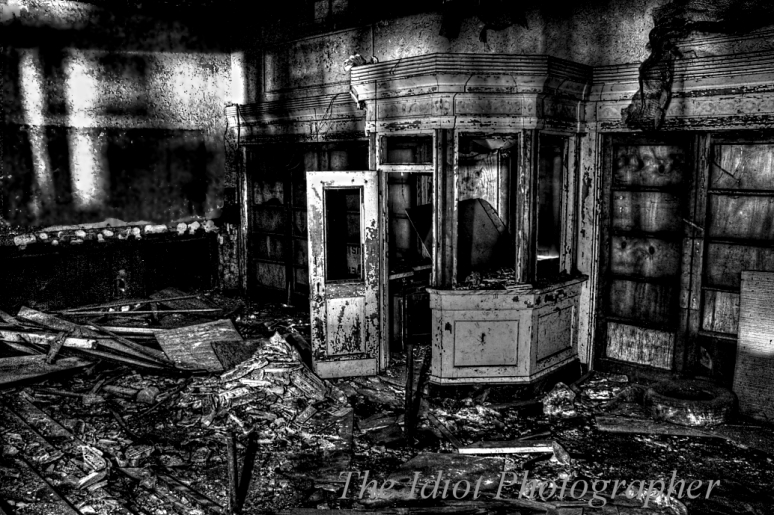 Ticket Taker’s booth in the lobby

One thing that surprised me about this location was how much intact glass there is.  Sure many planes of the lobby doors were broken, but many remain, and the great planes of glass separating the foyer from the theater proper are almost all intact.

The foyer itself is a study in urban decay.  The stairs are more or less ramps of rubble, don’t be fooled by the suggestion of steps you see here, the traces of explorers before me.  To access the balcony you must climb over a heap of rubble at the bottom and top of these stairs, as well as at the bottom of the stairs going to balcony from the landing.

Of course, to add to the fun all the piles of fallen materials were encased in ice, slick, and utterly unpredictable as to when it was going to give way beneath my feet.  Still, I don’t regret going up to the balcony, the view was with it.

This entry was posted on March 25, 2013 by DustMote. It was filed under Gary, Idiot Photographer, Urban Exploring and was tagged with Gary, HDR, Indiana, palace theater, photo, photography, urban decay, urban exploring.