Props to Gerald for tagging this spot 100 years before my arrival.

His ghost now haunts the attic, and this was the only graffiti on the entire property.

All of this home’s former inhabitants are long gone…but this house still stands empty and cold another year.

Hallowed Be Thy Name

A View From The Choir 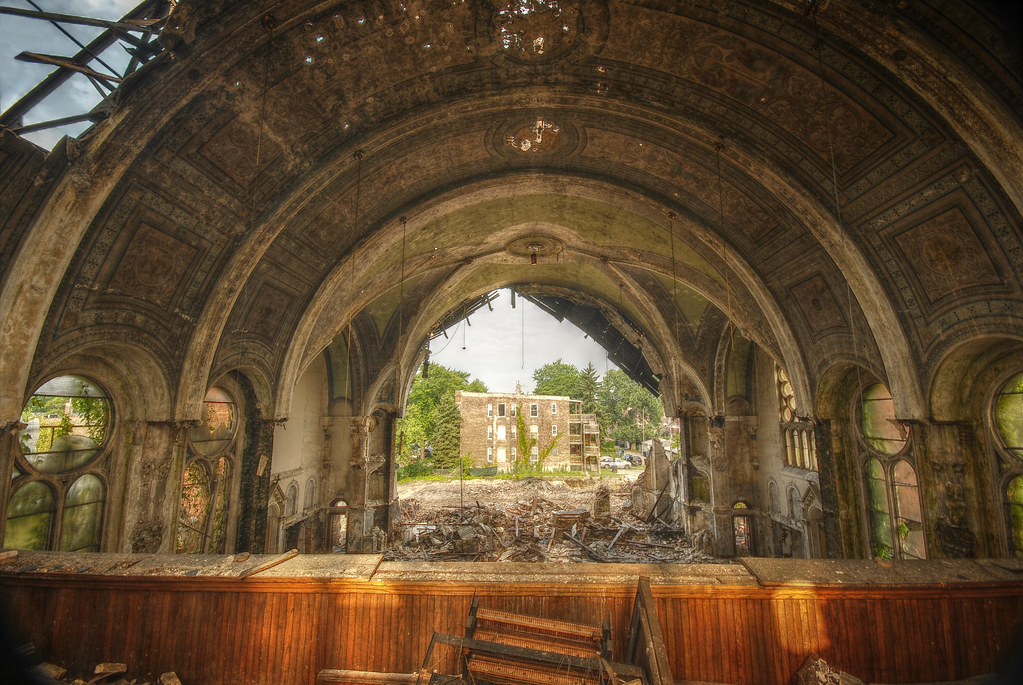 A lonely bingo machine sits on a community center stage. A little Googling yielded this video, which shows this  model in all its glorious circa-1983 action.

The sport of asthmatics.

Most of you that check in on this blog regularly read the news earlier today that my coblogger, the eponymous Idiot Photographer, lost her entire photo collection due to a computer crash. We’re hoping that with some help, she’ll be able to recover much of what’s lost. In the meantime, I feel like the clown that has been pushed out into the ring to entertain the crowd while the acrobat’s gruesome compound fracture looms in the background. Nothing to see there, folks! Look at me. Yuk yuk yuk!
And so,  I present the next stop on our tour of Detroit: the Eastown Theater. Opened in 1931, it was one of the city’s movie palaces, then later a live music venue hosting major acts such as Cream and Jefferson Airplane. Since finally being shuttered in 2004, it’s decay has been rapid, hastened by a fire which took out a section of the building. This is the view that greets the interloper who walks through the lobby into the theater.

It’s always jarring to see the moldering stacks of books that can be found in most abandoned schools in Gary. With a shrinking population and tax base, I understand why the school itself gets shuttered, but surely the books themselves could be of use? Here, at the former Edison Elementary school, the books’ final resting place is the tiny gymnasium. Observant readers will spot a ghost, courtesy of HDR stacking and long exposures. Boo!

Ashes to ashes, pulp to pulp.

The Idiot Photographer has already introduced you to the grandest of Gary’s old apartment buildings. Here are a couple of my shots.

View of main entry from street.

Lobby as seen through a hole in an adjacent apartment.