I recall it was enough, in high school, to mention you were going to the “Southside” to cement your badass cred. It would suffice to say you had driven past a numbered street (most east-west streets south of Madison are numbered in Chicago, as opposed to their conventionally named counterparts on the north side) to get a wide-eyed stare of fear and respect. When I had gotten lost as a freshly-licensed sixteen year old and wound up in a fender bender on 111th street, my friends acted as if I had walked into Mordor and back out again.
When I began work at the company I’m still with, I wound up having to drive around the Southside as part of my job. As I got to see the vast swaths of industry, housing projects and rusting infrastructure, my interest in urban exploration was born. Not yet urbex, in the sense of exploring the abandoned, but just visiting the less traveled corners of the city. There was a fascination in coming across the loneliest intersection in Chicago, or a former Nike missile launch site. Early on, this particular vista made a big impression on me: the bend in the Calumet River around 130th and Cottage Grove, looping around a massive factory. I’ve never been able to get a shot which captures the impression this peninsula makes on a passing motorist. I think one would have to get closer, maybe shooting from a boat on the river. But here’s my last attempt from a recent visit, all gussied up in High Dynamic Range and melancholy colors. Perhaps you’ll give me points for style.

As As I noted in my last post, I’ll be putting up a few shots from this enclave on Chicago’s Southside. The neighborhood started out as a company town for the famous Pullman Palace Car Company, a manufacturer of luxury rail cars. The company’s history is enmeshed with two currents of American history: civil rights, as well as the organized labor movement. In the case of the latter, the famous strike of 1894 was precipitated by an economic recession which cut deep into the company’s profits. The owner, George Pullman, responded by cutting wages of his employees, but not the rents in the company town in which they were required to live. His paternalism was such that it prompted one of his workers to famously quip, “We are born in a Pullman house. We are fed from a Pullman shop, taught in a Pullman school, catechized in the Pullman church and when we die we shall be buried in a Pullman cemetery and go to a Pullman hell.”

Though this area has changed much in the last century, it is still recognizable for its red brick rowhouses. Most of the original carriage works are gone, but a bit remains, including this former administration building, restored since an arson fire in the early 1990’s. 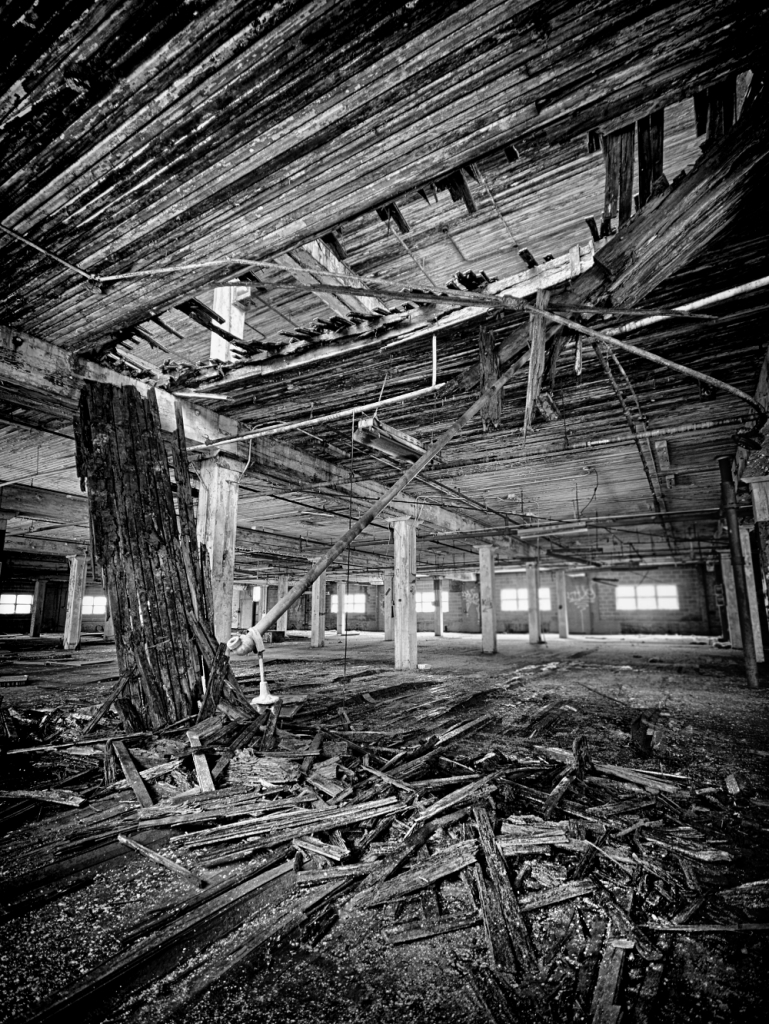 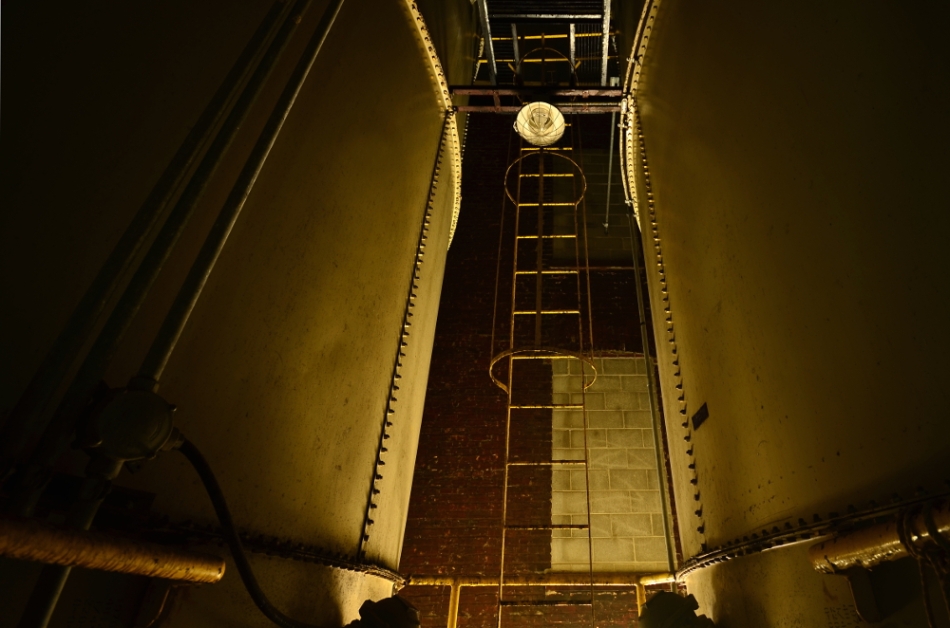 Conveyor belts stretch out and double back on themselves in an abandoned chewing gum factory.

From an abandoned industrial site on Chicago’s south side.

What can I say; Christmastime brings out the exceptionally morbid in some people. 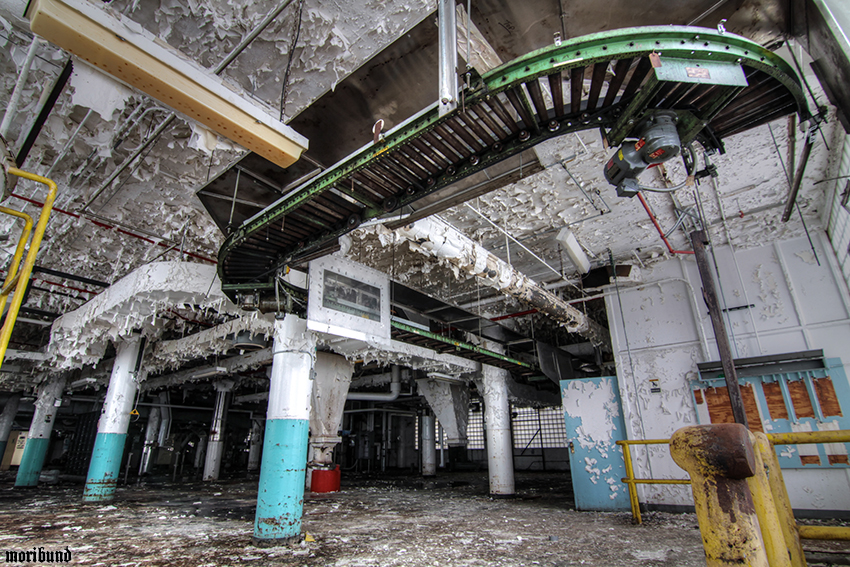 Abandoned chewing gum factory – the floors, walls, and everything else in this photo were sticky with sugar.

“Outside the ordered universe is that amorphous blight of nethermost confusion which blasphemes and bubbles at the center of all infinity—the boundless daemon sultan Azathoth, whose name no lips dare speak aloud, and who gnaws hungrily in inconceivable, unlighted chambers beyond time and space amidst the muffled, maddening beating of vile drums and the thin monotonous whine of accursed flutes.”
-H.P. Lovecraft 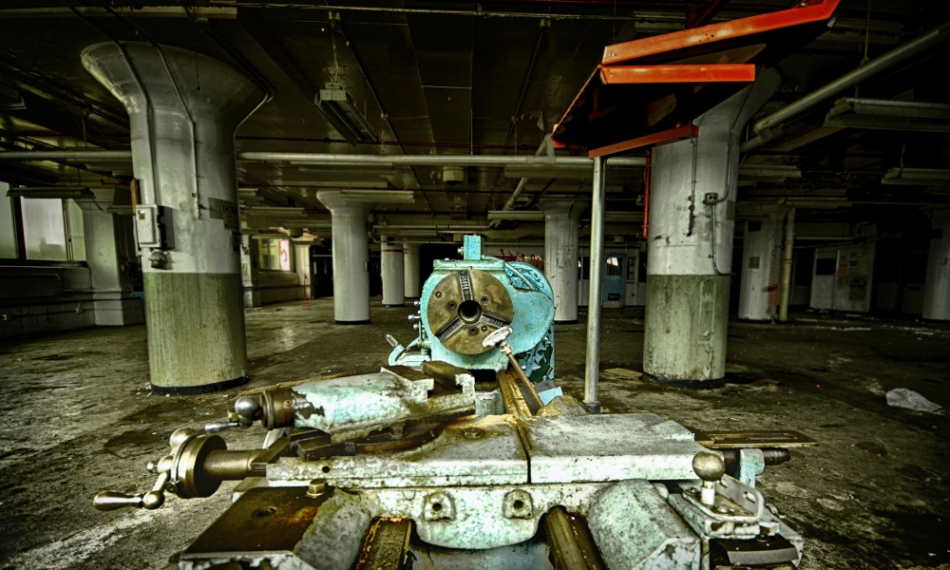 One thing Cleveland has in spades in empty, abandoned factories that range from spectacular architecture to a hollow, echoing concrete box. 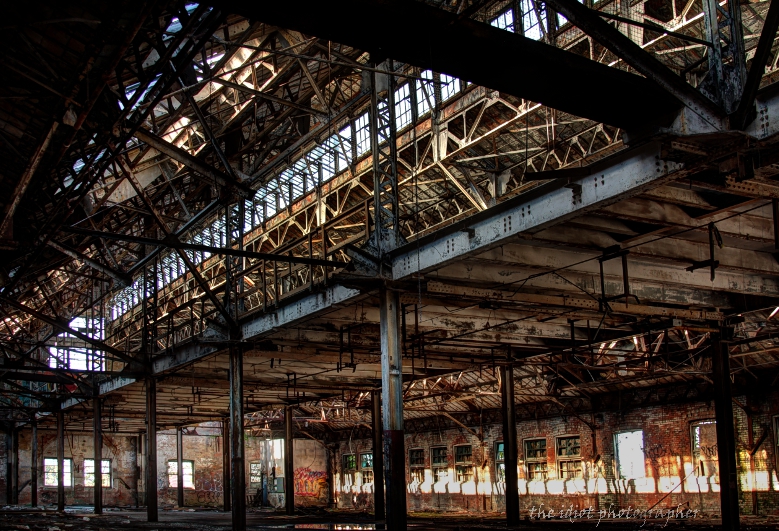 But even in the most seemingly barren of places there is a magical place to be found. 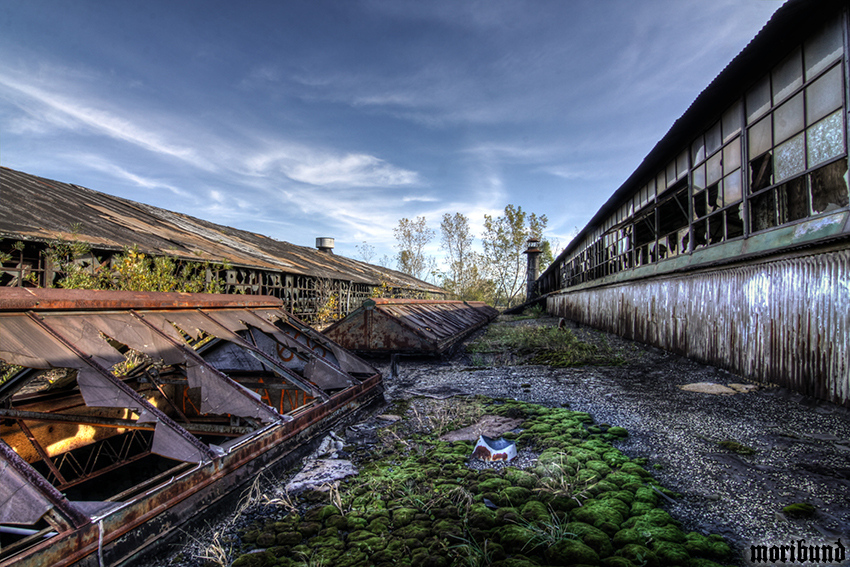 A reminder that the fastest way between two points is not always the most desirable. 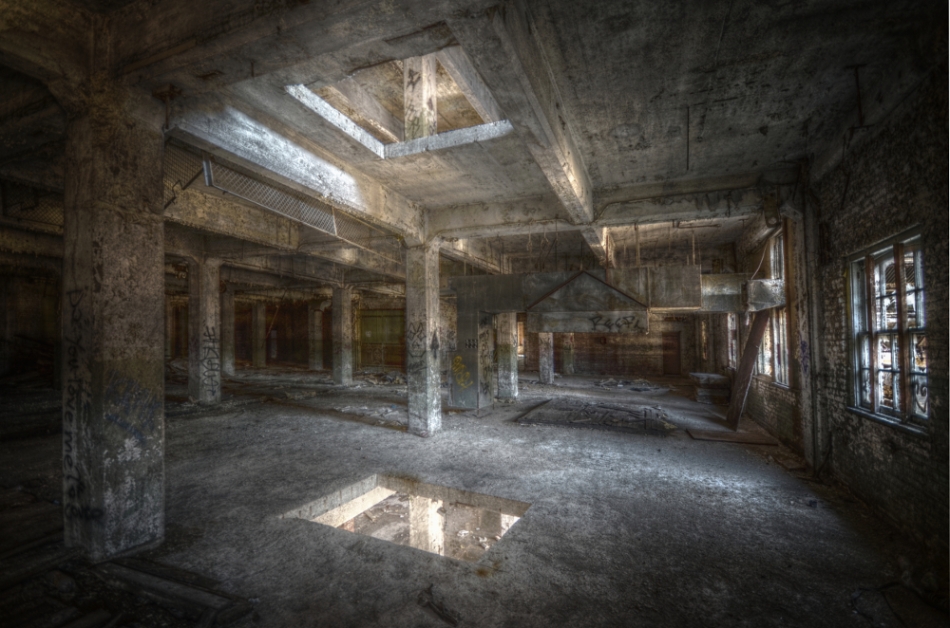 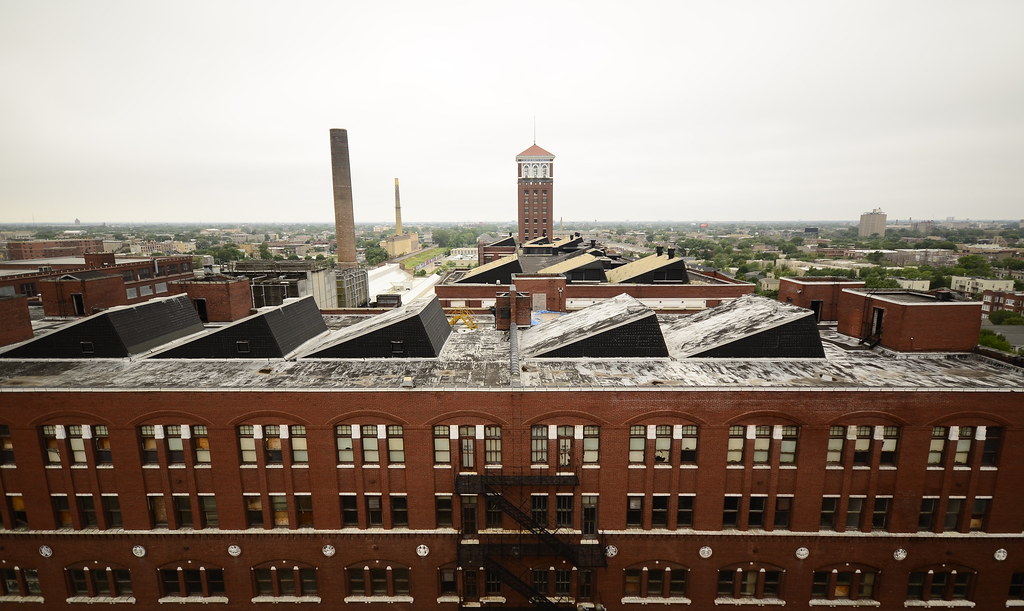 Of Dead Gods in Winter

“Outside the ordered universe is that amorphous blight of nethermost confusion which blasphemes and bubbles at the center of all infinity—the boundless daemon sultan Azathoth, whose name no lips dare speak aloud, and who gnaws hungrily in inconceivable, unlighted chambers beyond time and space amidst the muffled, maddening beating of vile drums and the thin monotonous whine of accursed flutes.”

View from the east bank of the Chicago River.

Chicago’s skyline has many facets. Viewed from varied distances and vantage points, the city center can look imposing, majestic, or at times surreal. On postcards, views from the lakefront dominate. But I have always loved the view from the near South Side, at a point in the city’s topography where the low bungalows of Bridgeport and Chinatown give way to the utter flatness of river and railyards before exploding skywards north of Harrison Street. The building pictured in the foreground is the only thing that breaks the aforementioned flatness around Roosevelt Road; it is the power plant for the nearby train station and (now defunct) post office. In the background, lit green for National Emesis Awareness month, is the Sears Tower.

Step Up, Step Down

So long and thanks for all the free fish.

So many implications, so little time to explore them all. I’m just going to go with creepers trying to lure dolphins in. Makes sense to me.

This is a guest post from our companion on our most recent visit to Packard.  You can visit her blog at juniorbbq.wordpress.com

So, I have this thing called FOMO…or “Fear Of Missing Out” syndrome. People can’t put an inkling of a thought in my head that even REMOTELY interests me, because I’m going to fixate on it and make life difficult until I just DO it already. My trip to Detroit was just that…a textbook case.

Then I got an email in January. “Our plans are to be in Detroit in early February to explore all of Packard (and whatever else we may find if time allows). I don’t know how close to Detroit you are, but you’re welcome to join us.” Oh…my…heck. First of all, an invite to the MECCA of urban exploration. Secondly, in DETROIT? How was I going to make this work? I’m a two-and-a-half day drive from Detroit, and a plane ticket would be INSANE! But, FOMO. And I made it work. There I was, on a plane on Valentine’s Day, going to a derelict city I’ve been to ONCE, meeting people I have never laid eyes on, to a place that is the largest abandoned structure in the WORLD. I don’t know if these people are going to knock me out with a tripod and leave me in the ruins that are the Packard Plant. But, FOMO.

We met early Saturday morning at the Eastern Market. My sherpas seem affable…but I’m still wary. It’s cold, it’s early, I had no Tim Hortons in me…I don’t know what to expect. In a foreign country with complete strangers. No one can accuse me of not living life, right? FOMO, after all.

Then, there in front of me, the sprawling ruins of the Packard Automotive Plant. We parked inside one of the warehouses to keep out of suspecting eyes, and off we went.

And it was amazing.

For someone who lives on the prairies, where vast emptiness dotted with abandoned farmhouses are the norm, I felt way out of my element but excited at this new challenge. The Idiot Photographer coined the phrase, “the never ending Packard”…and no truer words had been spoken. It seems rooms went on forever. The graffiti went on forever. The discarded bricks and smashed windows and staircases to more never ending rooms.

The cold went on forever too, it seemed. About two hours in, I was COLD. And I’m a Canadian from The Prairies. I live in a city coined Winter-peg, for crying out loud. And I was COLD. But I don’t say anything, because I don’t want to be “that guy”, right? I’ve got something to prove to these people who were kind enough to think of me and invite me along on a trip that was clearly important to them. But hell. I was getting to the point where I didn’t know how much more I could handle. And it was only nine in the morning! Fortunately Tabula Rasa had a brilliant idea…let’s get some breakfast to warm up, and then re-evaluate the situation. At that point, I was thinking of telling them that I’ll have some coffee and breakfast, but then I was going to head out. I was cold.

Over breakfast, conversation went all over the place, and I got to know my sherpas better. WONDERFUL people. Love what they do. The Idiot Photographer talked about a particular place that needed to be shot…the ring-toss room…and how cool it looked. I’m still on the fence about whether I wanted to go back out into the cold, but…oh…here it comes again…FOMO! The Idiot Photographer was REALLY adamant about the ring-toss room and the way it was described well, I just HAD to see it for myself. So, we bundle up and off we go again…to get back into the depths of Packard.

I am THRILLED that I made the decision not to wuss out. With a belly full of eggs and bacon and coffee…delicious, delicious coffee…I had my second wind. I was seeing the plant now as more than something with four walls (sometimes) that was holding on to the cold and shoving it down my throat. I was SEEING the rooms, the graffiti, the broken glass and discarded bricks that went on forever. Tabula Rasa and The Idiot Photographer were playing a game of dueling staircases…I was soaking it ALL in. And I loved EVERY…SINGLE…SECOND of it all. My lower back was SCREAMING in pain, and I think I popped out my hip climbing through a hole in a wall to get to a precarious ledge, and I lost feeling in a couple toes, but I wasn’t stopping. In fact, I think they would have had to drag me out of there if they were ready to be finished and I wasn’t ready to go.

FOMO. Fear Of Missing Out. I have it, and it was the best case of giving in than I can remember.

Trying to stay on theme, but at some point the corridors in Packard grew to wide avenues or else encroaching ruin had made them barely passable. Are these still hallways? Close enough for the purpose of getting a blog post up, I’d say.