First, Do No Harm

A shady physician awaits his next patient. 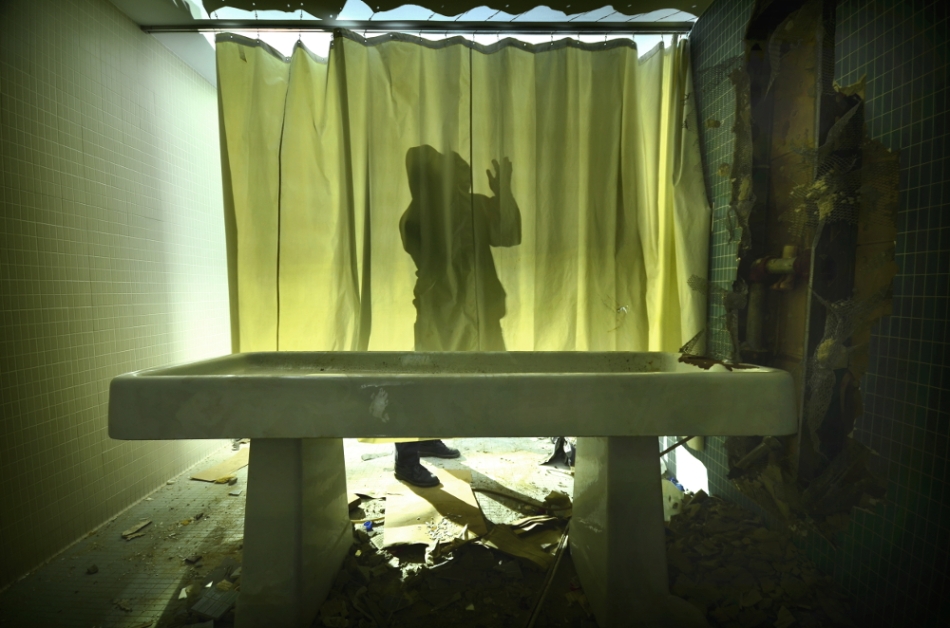 From a defunct hospital in Kentucky.

…in the basement, apparently.  You’ll never guess who was up in the rafters.

I can only imagine the lurid fascination with which the schoolkids must have regarded the derelict hospital adjacent to their classrooms. Reality seldom compares to teenage fantasy, but should any kids have sneaked into the hospital, they would not have been disappointed in what they saw. 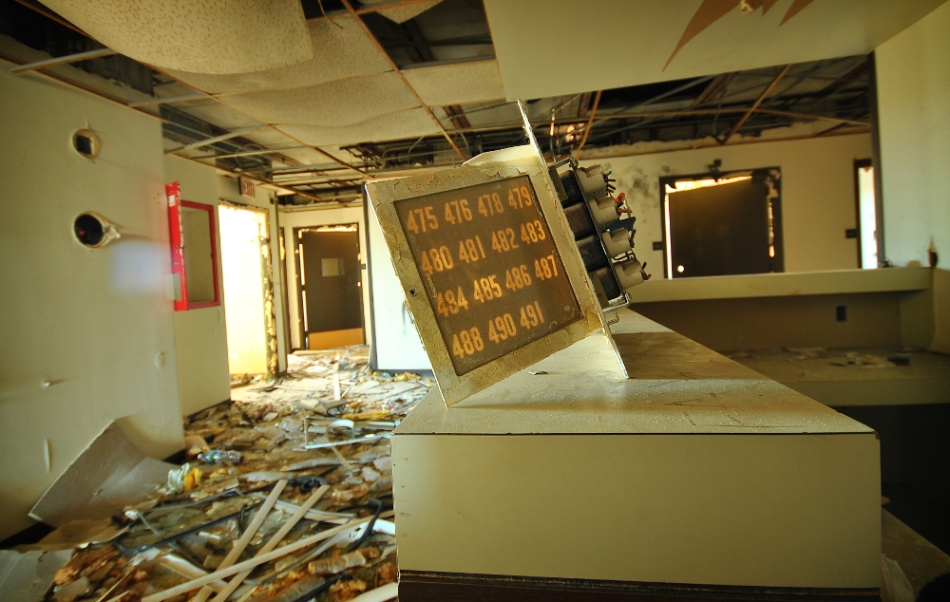 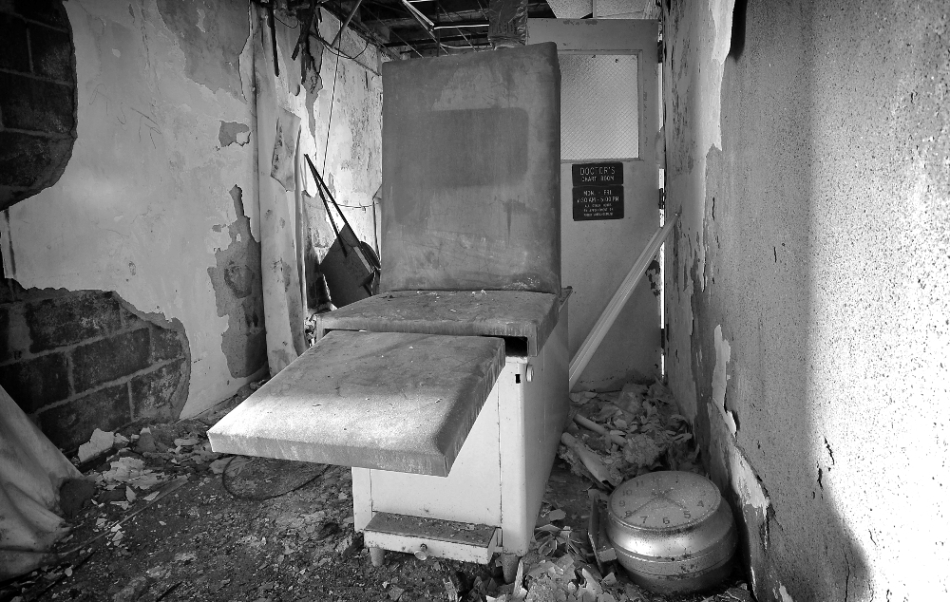 As our fellow blogger Sometimes Interesting has documented extensively in Gary, Indiana, urban decay is a slow process. Rarely do buildings just go dark overnight; more often a succession of tenants come through after the original. Grand edifices get repurposed towards ever more menial ends until finally the lights go off for good. Never was this dynamic more vividly on display than in Highland Park, an independent enclave which lies completely within Detroit. Upon first inspection, we thought it must be an abandoned hospital.

There was an entire wing of the building, which the school had bricked up access to, that remained hospital. Your intrepid explorers did find a way in, however. Pictures of that will come next.

I plan things.  Most of the time I am willing to just along with whatever, but when I get an idea or have a mission, I plan things.

I had Sunday all mapped out, we were going to be hitting several locations and I wanted to explore a building or two that looked promising on Google Maps.  I changed my mind, changed it again, and settled into an idea of what my day was going to be.  Then, opportunity arose.

My day ended up going nothing like planned, and we never made it to the building I wanted to see.  I couldn’t be happier.  I still managed to get almost all the photos I needed for my project, and then some. 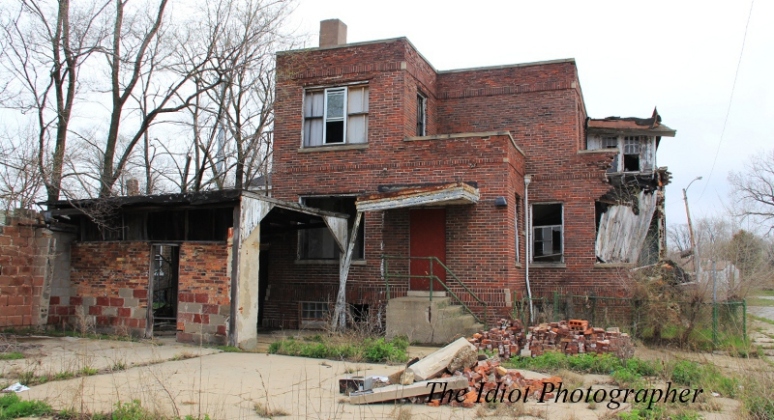 I have so many photos I’m not even sure where to start, planning fail.

I have a little project going on the side which I will be telling all of you about soon, but for now I’ll just say that there was a reason I needed to see St. John’s Hospital from more than one angle.

Sorry things have been so slow around here everyone, I haven’t much opportunity to go out exploring as of late.  Our last trip was cancelled as Tabula Rasa was feeling under the weather but he is feeling better now and this Sunday we have plans to go poking around the old granary again.  My last trip there I was a little rushed and didn’t get to explore past the 6th floor.

So we’re going to head back to St. Mary Mercy for today’s post.  This is another location I would love to explore again.

On the first trip through a new building it is so easy to just keep going and see what is in the next room, down the hall or around the corner.  It is easy to miss a room or even whole hallways, so you tell yourself “We’ll go back for another round.”  As I mentioned in a previous post this doesn’t always work out very well since things can change quite abruptly in the space of a week or month.

St Mary is interesting since, like so many hospitals, it had grown over the years.  You could very clearly tell what portions of it were the original building from the 1920’s and which parts were tacked on later.  This stairway is from the oldest part of the building, and were in better shape than some of the new portions. 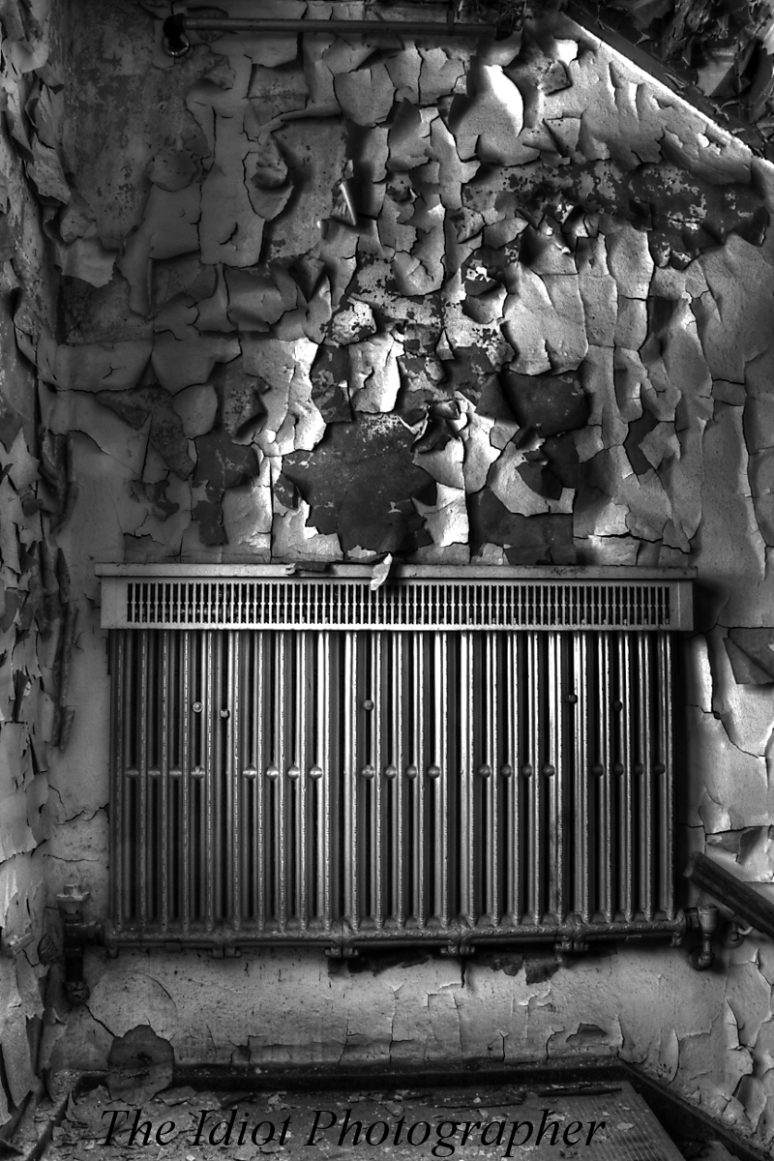 This is also from the oldest part of the building, and makes me wonder why I can’t have radiators like this in my apartment.

Just imagine you’re poking about the third floor of a 7 floor building in the dead of winter.  And then you see this hallway. 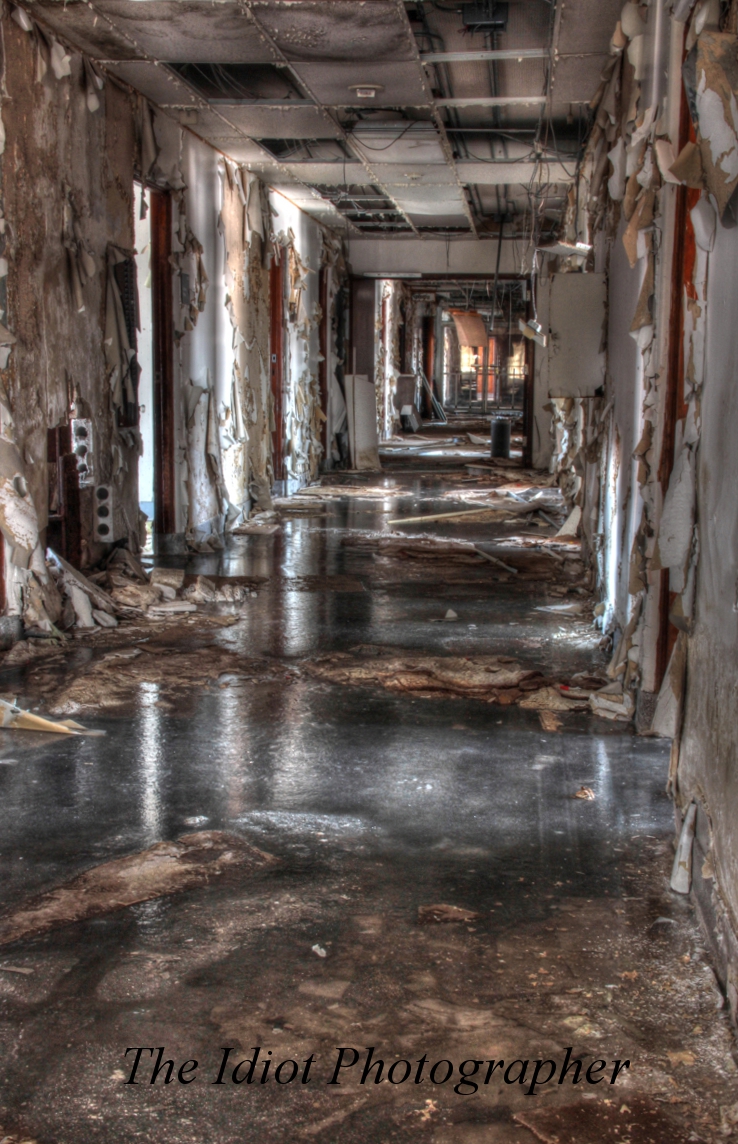 Just in case you wondered why I do this, it is because of moments like this.  Over an inch of sheer, glassy ice coating the floor, in the middle of a building.  I felt I stepped out of reality in to a dream.

On pretty much every trip we do Tabula Rasa and I end up taking one or more of the same photos.  There are just some views that beg for a photo and you’d have to be pretty much blind to not see it and shoot it.  Generally we split up, but stay within shouting distance of one another for safety’s sake.  This trip I think we managed to diverge quite a bit (though both of us took a photo of the same thing in at least two instances, perhaps we’ll post them together and ask for everyone’s input to compare and contrast later).

First, your obligatory hallway photo with an improvement. 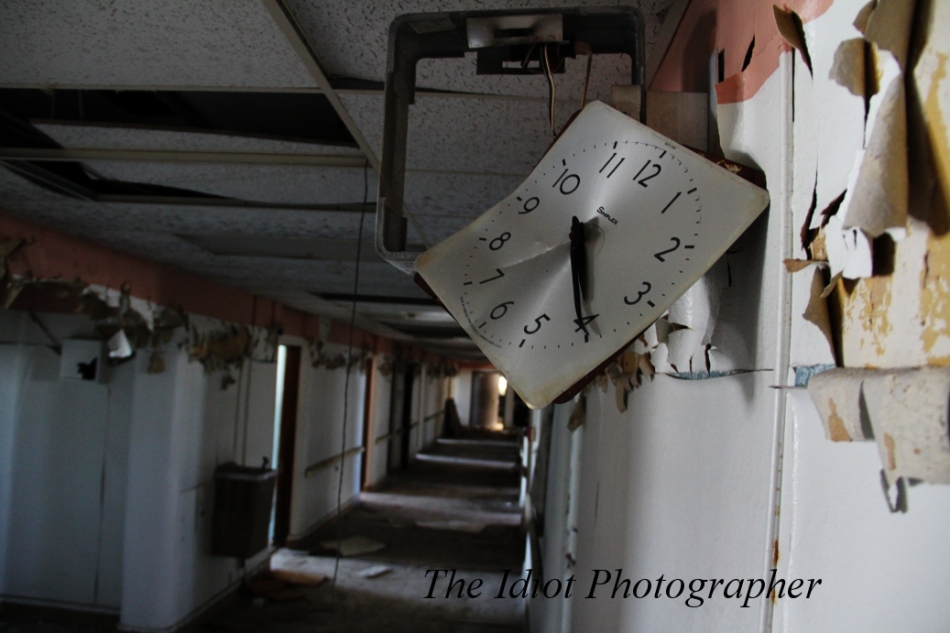 I walked past this at least 3 times before I noticed it.

There were, however, just enough hidden gems to make the place interesting. Kind of like an Easter egg hunt, but with rust and ruin in place of eggs. This, as the Idiot Photographer was kind enough to inform me (please read the preceding in sarcastic tones) is not, as I called it, a “sterilization oven thing”, but an autoclave. I immediately understood that the object was not what I had thought at all, but rather like an oven that’s used for sterilizing things (this post is crying out for this).   Anyway, here’s the thing in question:

The finest elevator money could buy in 1983, complete with faux wood paneling and fleshtone phone. 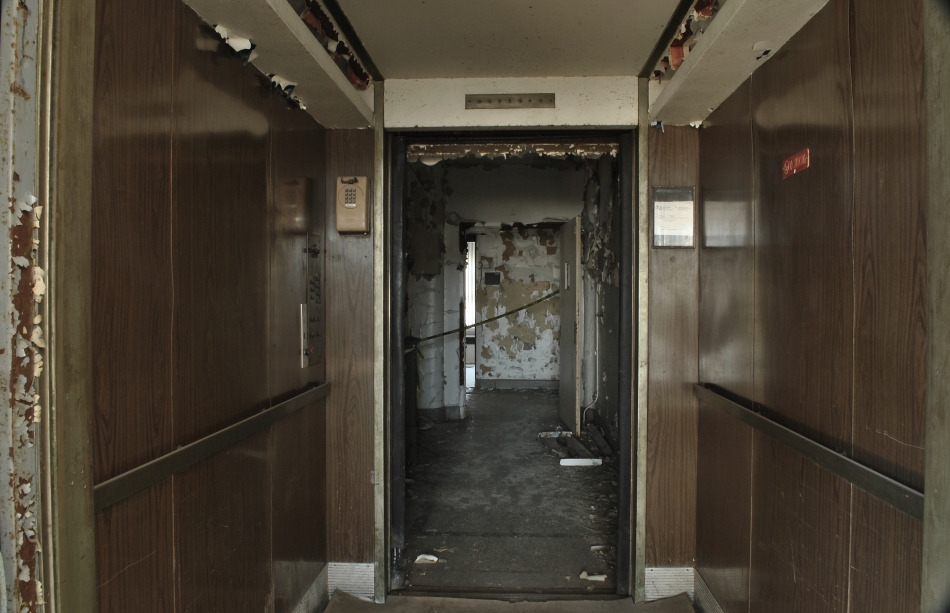 The elevator machine room on the roof would’ve been a neat find in any circumstances, but a fully charged fire extinguisher hiding in the corner provided what hopefully is a moody fog to accent the shot.

We were reluctant to take on this site, seeing as how it sits adjacent to the Gary police headquarters. In fact, some parts are still used by the department. That reluctance, it seems, is shared by the locals; the hospital’s interior is relatively free of graffiti and vandalism.  Though mostly stripped of appliances that  would be readily recognized as medical,  there was still a lot to see. Here is what appears to be a nurses’ station:

I make an accidental cameo in this shot as I try to light it from the staircase. 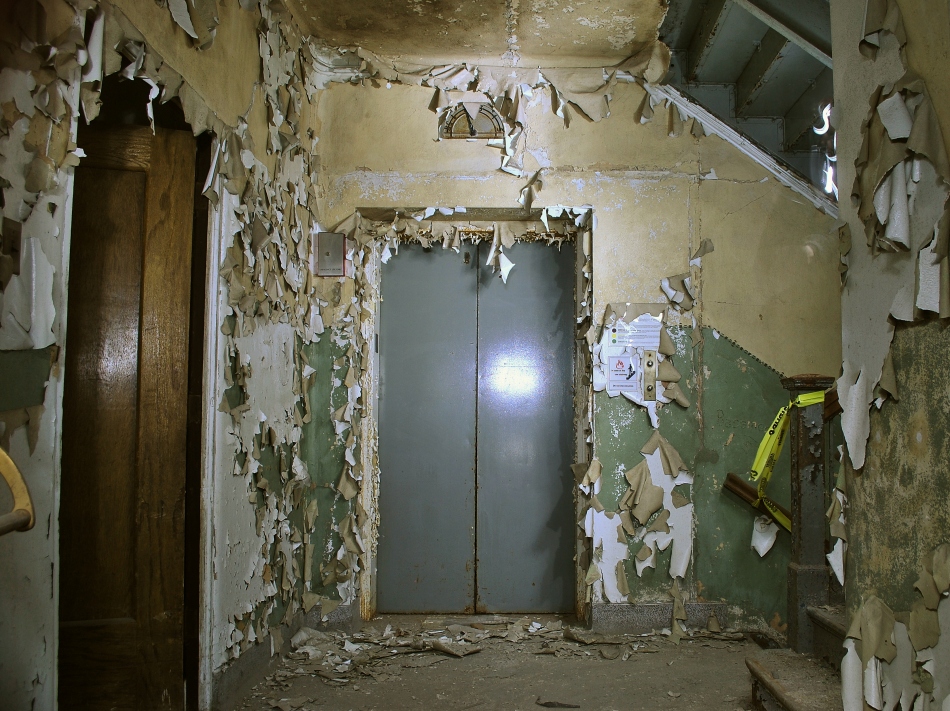 Way back in the unilluminated age of segregation in the United States to our great shame we did not afford all people the same rights to basic services such as health care; this was based solely on the color of one’s skin.  Certain regions of Indiana (as in most of it) failed to provide hospitals for people of African decent and turned them away from the doors of public, “whites only” hospitals.  Gary Indiana was no exception to this despite the fairly large black population and so Dr. Frederick McMitchell took it upon himself to open the McMitchell Hospital to serve this under served portion of the populace in 1929.  The following year the two neighboring hospitals relented in their segregation policy, but McMitchell stayed open for another 30 years during which time it became St. John’s Hospital.

Sadly this historic and lovely building is quite possibly beyond rescuing at this point; there is so much damage that the interior is quite unsafe and we did not stay long.   I wasn’t even going to try walking down this hallway, the section of floor I was standing on was already a good 2 inches lower than the entry way, and this hall another 3 inches lower than that. 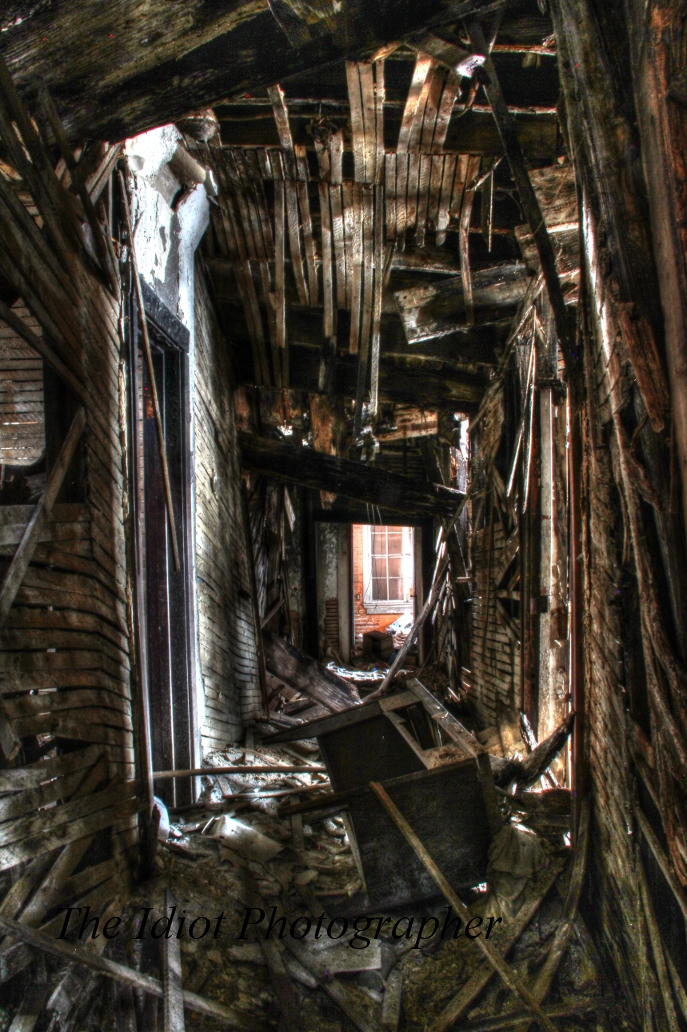 You can just barely glimpse the second floor through the gap in the wall here, it appears there used to be a door somewhere in this mess but only half of it is above floor level now. 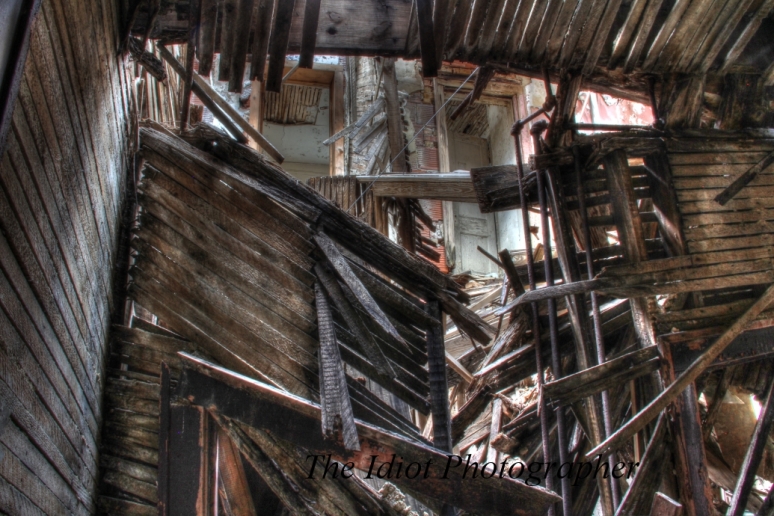 If I could save any one building in Gary Indiana, it would be this one.