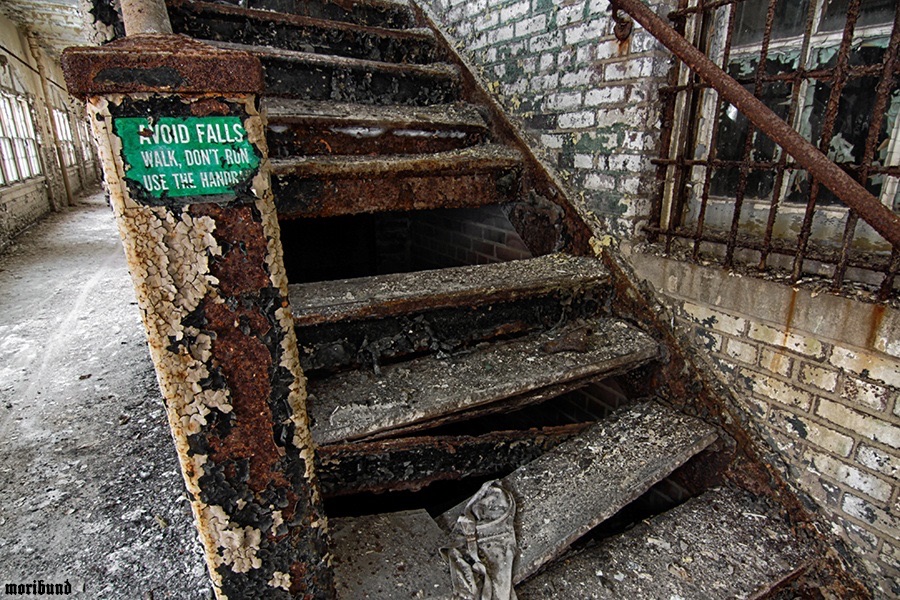 This sign was painted over twice in the past,
leaving stair-goers clueless about proper stairwell etiquette and safety.
Years of neglect and the weathering of the elements deteriorated the steps
while simultaneously revealing the ancient warning.
Everything falls into place in perfect synchronicity,
sparing one casual explorer a turbulent trip to the cellar. 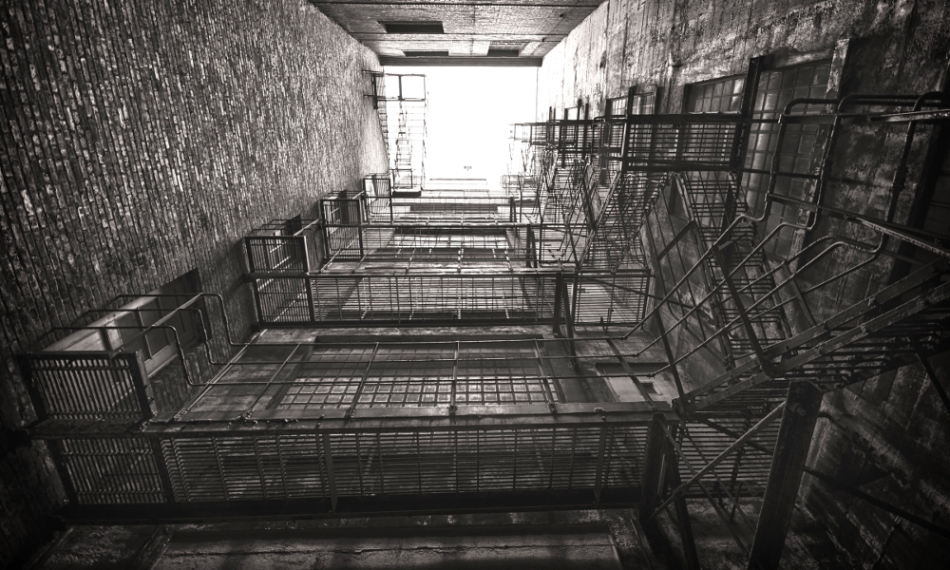 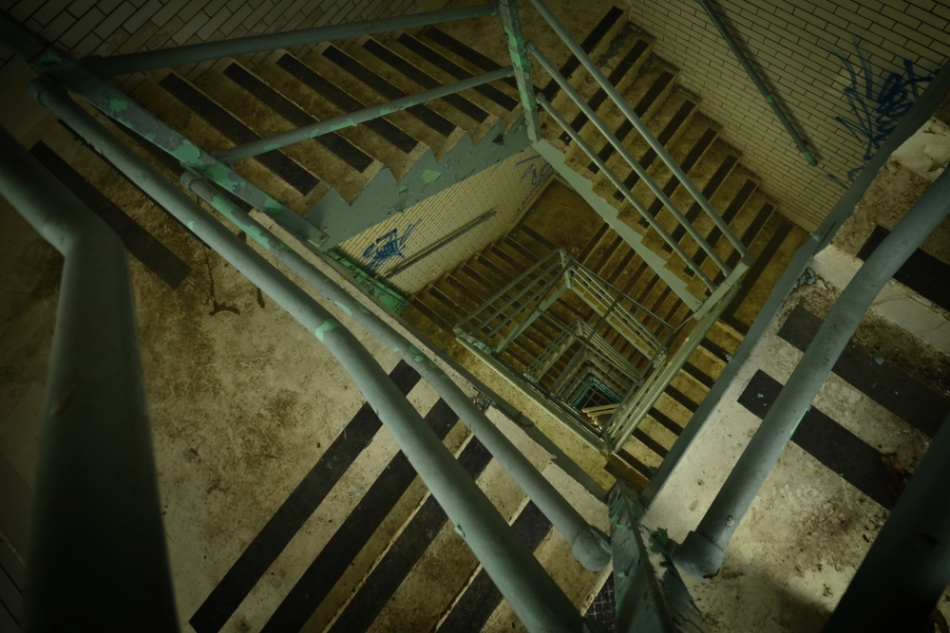 Second floor view looking up in an abandoned infirmary tower stairwell.
The structure is filled with natural light, but is haunted by the living.

In Case of Fire… 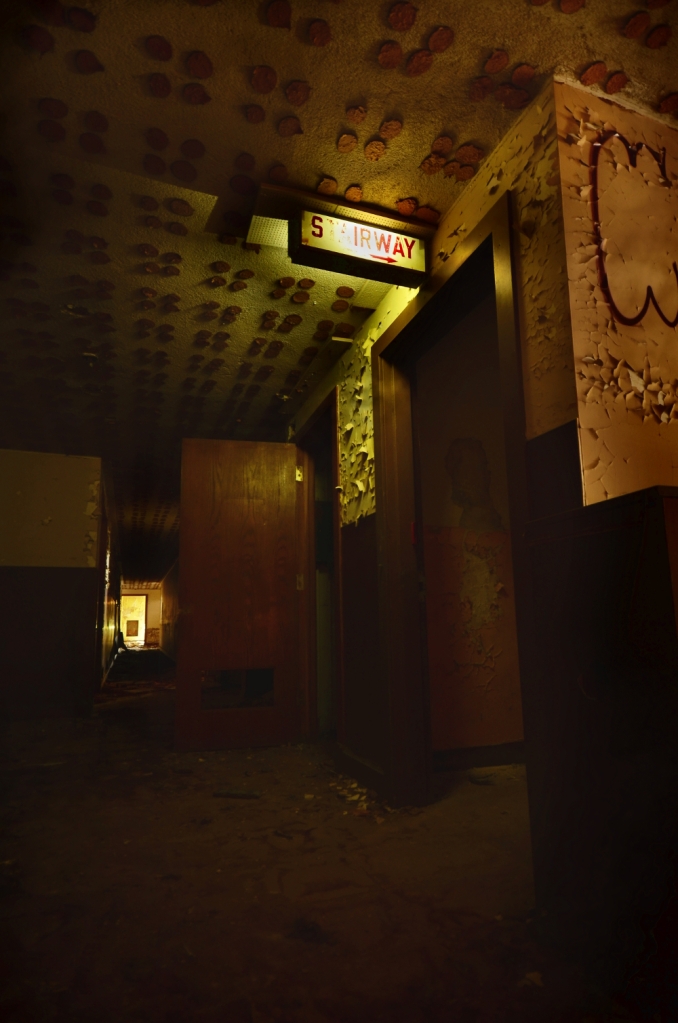 Don’t want to live in a decaying shell
But why should I go to heaven, and who’s to say I’ll enter hell.

If future archeologists labor to distinguish what set turn-of-the-millenium America apart from other places and times, superfluous signage may be a handy reference point. 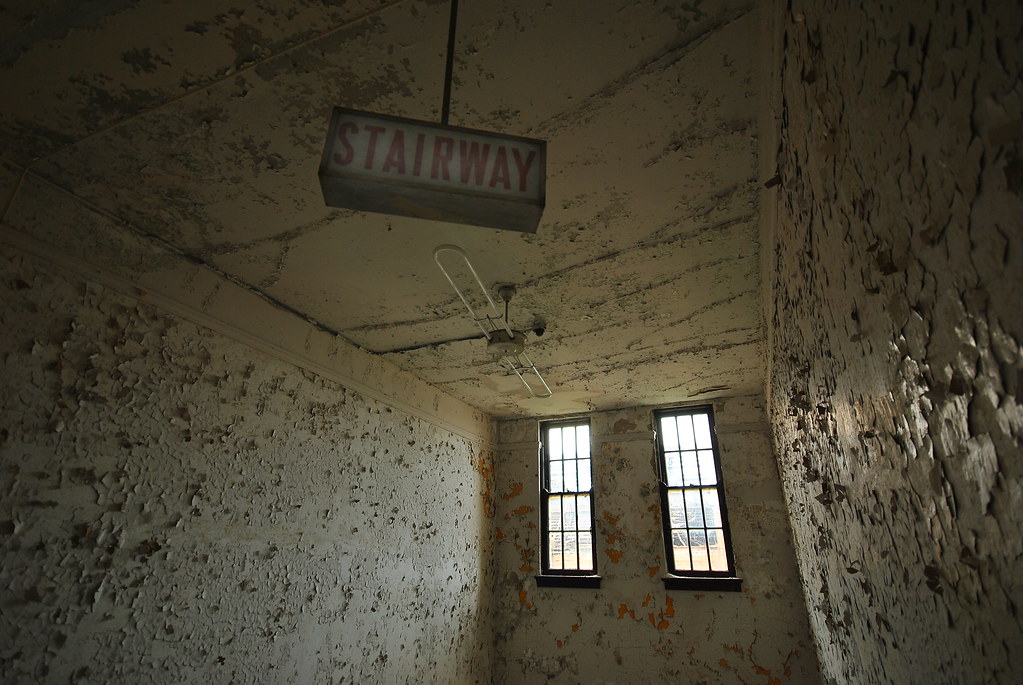 With A Nod To Fritz Lang

A bit of German Expressionism is good for the soul. 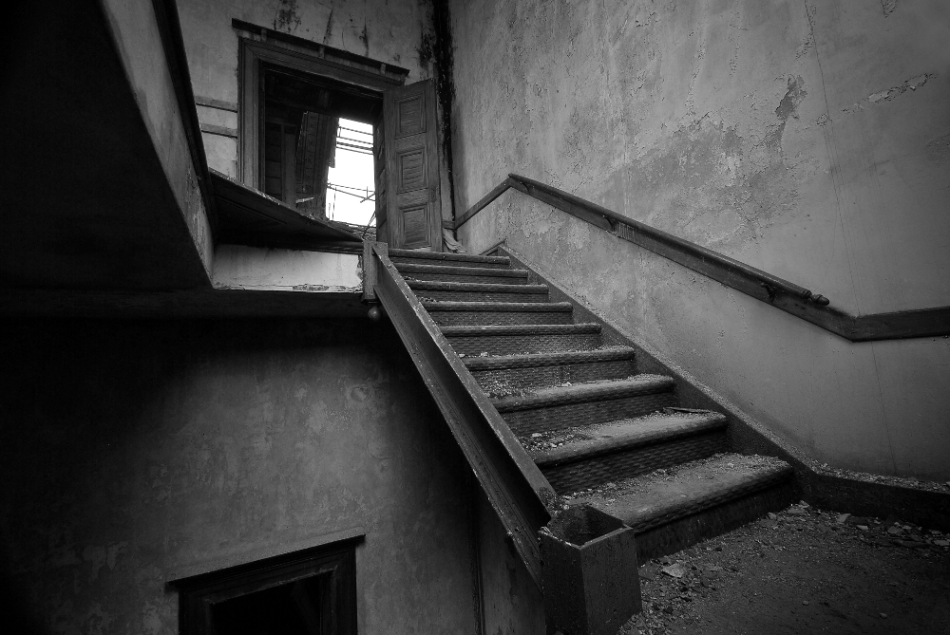 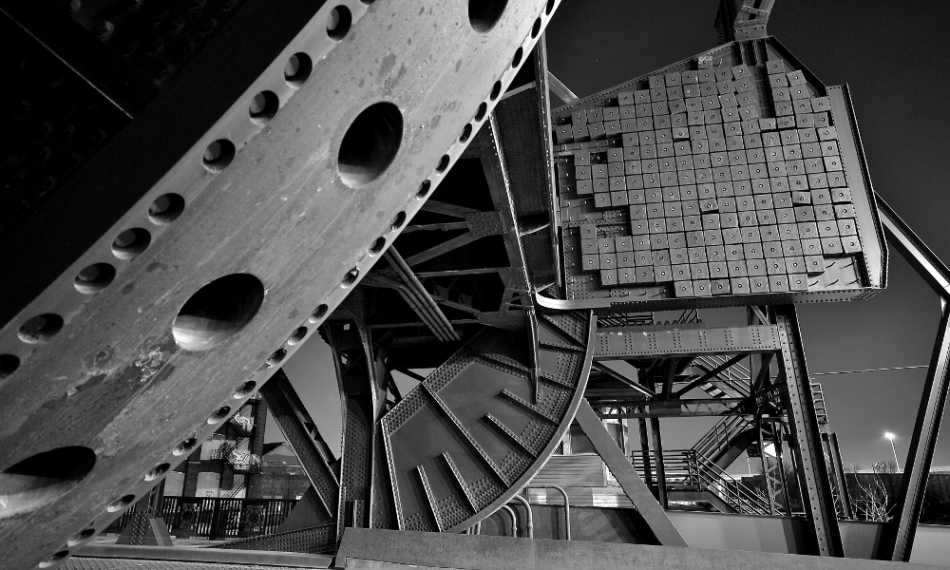 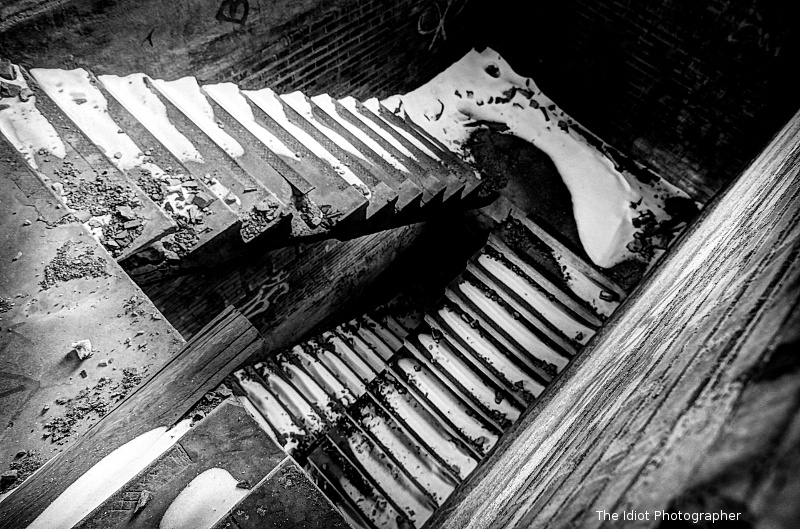 I could have gone down these stairs but chose not to.  They were too pretty.

When you’ve been trading stair-themed posts with your co-blogger for a few days, acceptable post titles dry up quickly, especially when you are attempting to come up with said title late at night. Sometimes it’s best to overshoot the sublime and land in the ridiculousness.

Wait, wait! Van Gogh’s Stairy night!
No?
How about, Quit Stairing At Me, You’re Freaking Me Out?
Wait, where you going?

Keeping with the theme of late, and matching the Idiot Photographer blow for blow, I present to you: more stairs.

A topic not often broached among urbexers, unless in bragging of its disregard, is danger. Now, I’m not trying to present us as brave adventurers á la Indiana Jones, but we do face risks. Nothing exemplifies these risks better than stairs. We do try to be careful; some flights we will only take one person at a time, others are felt out a step at a time with a tripod. These little cautions are really rudimentary; one can only hope that one doesn’t follow in the footsteps of Richard Nickel, the godfather of modern urban explorers, who died when a portion of the building he was photographing collapsed onto him. So it is that we each choose one of the three paths when confronting our risks: fate, faith, or fatalism. None are particularly efficacious at warding off imminent catastrophic structural failure, but are the crutches we use to be able to climb those stairs nevertheless. Ultimately, the only practical advice to be given on the subject of climbing that last flight of stairs is: don’t look down.

A peek inside a shuttered school on Detroit’s east side.

Sometimes an undignified scramble is safer than a crumbling step. 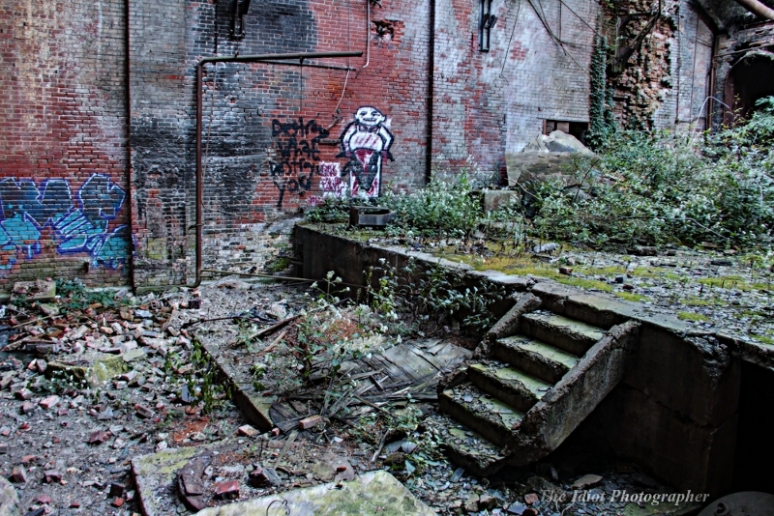 Time and chemistry have done their work in rendering these stairs unpassable. 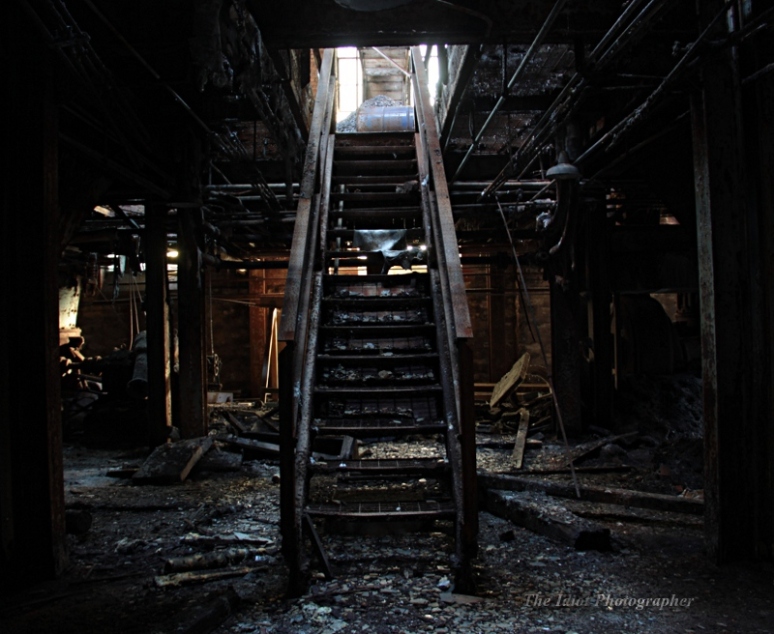 The one new site we happened upon was mostly a dud. It’s curious how just a plain old abandoned factory doesn’t quite cut it anymore. It has to fall between the extremes of urban decay: too fresh, and it doesn’t really look abandoned. Too picked over/stripped/demolished, and you’re looking at a trash heap. In the middle, you find character. The plant we discovered fell into the latter category; there were heaps of junk everywhere, but little feel of what actually went on there when it was in use.  This shot looking down a staircase was the only point of interest I found.

A Case of Stairs.

Some years ago we stumbled across a former furniture store, you can only access the ground floor, because the main stairs look something like this.

These days there are two large holes, and some plywood ramps over them because that is safe.

The back set of stairs were in even worse shape.

Now these stairs have only the bottom 4 steps or so, they are just gone.

Every now and again I would see photos of the couch sitting at the stop of the stairs on Flicker, and I have been waiting for the day it goes crashing through the stairs to going the rest of the furniture in what I call Sofa Hell.  But stubbornly, year after year, it remains out of reach  at the top of the stairs.

You may have noticed the large holes in the main stair case, they were caused by people braving the rusted steps and plummeting through.  From what I have heard no one was seriously injured but a camera did meet its demise.   I’ve been wanting to visit the second floor since we first found the place but it wasn’t until our most recent visit that BentBottle showed us the safe and sane way to get there.

So at last I can take this photo.

I didn’t brave these stairs since I don’t trust them at all, but the second floor was interesting enough all on its own.  You’ve already see one photo from there, the tree from yesterday.

Next stop, Sofa Hell.  or is it Sofa Purgatory?  Perhaps they will be admitted to Sofa once heaven once they lose the tacky upholstery.

This was taken a couple of weeks ago at the church which I and Tabula Rasa have featured a few times recently.  As I was processing  it I  got to thinking about some the risks we take every time we go into one of these buildings.  This building in particular  is very popular and a lot of people in the Greater Chicagoland Area get their start in urban exploring here.  It has seen major motion pictures filmed in it and countless indie films have been shot here.  We have seen lingerie models doing photo shoots, and goth models, heck we even did a drag queen shoot here ourselves.

In a subtle way this lulls one into thinking “This building is safe.”, when that is far from the truth of the matter.  I’ve mentioned that I’ve come close to being murdered by pigeons knocking bricks loose from the ceiling and that is just one of the dangers one encounters in a building like this.

Walls are crumbling, the roof is collapsing, the floors are getting questionable in a few places and the stairs are littered with debris.  In some places they are nearly unpassable and some are so damaged they are totally unusable.  In a few buildings you can actually see where people have fallen through the stairs and I wonder how much longer this particular location has before someone is injured and the city makes an effort to keep people out.  Not that it will stop them.

Welcome to the first ever Photo Death Match, in which Tabula Rasa and I incidentally took photos of the same object and will now share said photos for you, our small but wonderful group of viewers, to tell us which one of us got it right or wrong.

Each attempted set-up and shot out in the field is akin to finding a diamond in the rough. Before you roll your eyes at the florid analogy, consider that a diamond cutting is a daunting task. The cutter must fashion the largest, most valuable gem while chipping away as little as possible of the very precious mineral. A clumsy cut, meanwhile, can ruin its value. So with each place we visit, I feel there is a “right” shot: correct exposure, framing, editing, etc. I thought this shot of the hose is not”right”. The hose spilling out is nice, and an opened glass door seems like it would add some drama. The monotony in color and middling light needs to be contended with, and here I don’t do well with either. And the angle of my shot is too dead on, everything looks flat. 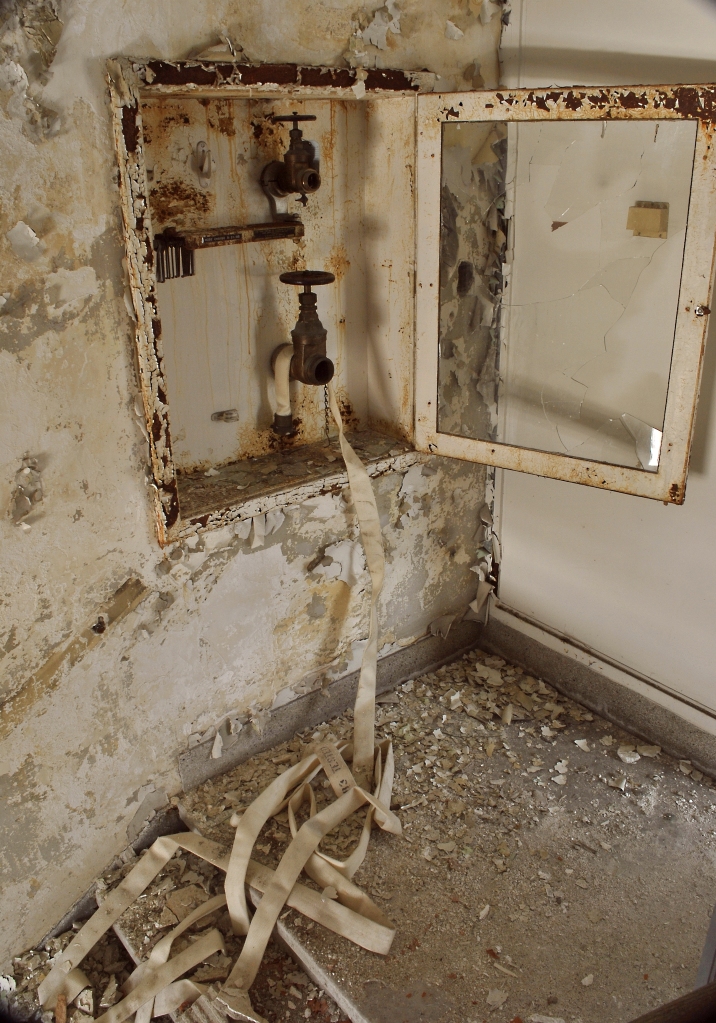 I think I did better with this one. Tweaking the lighting, color balance and framing yielded something I’m not ashamed of. 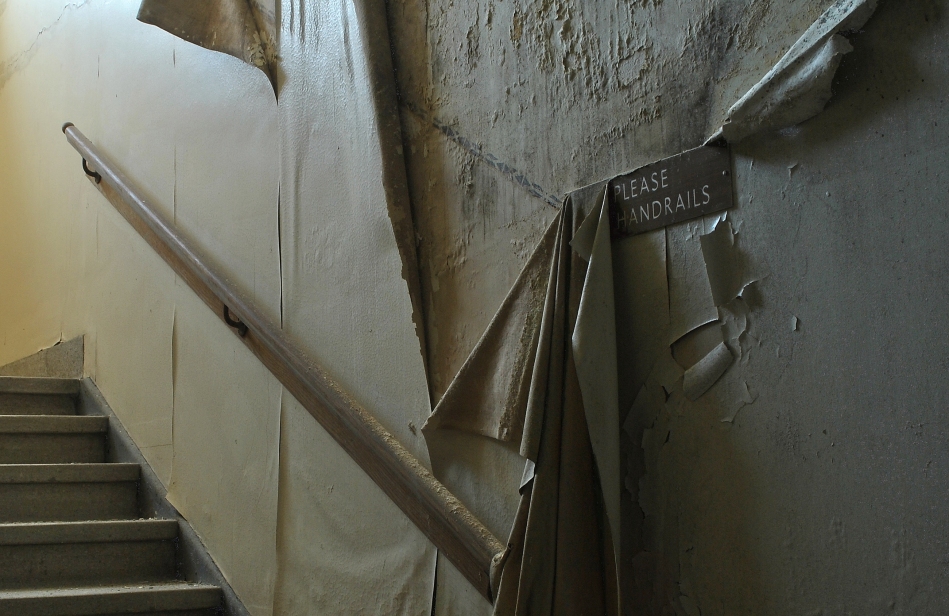 This little match was my oh so brilliant idea.   I just picked the two things I knew for fact that we had both photographed, not considering the quality of my photos .   I consider this a good thing as neither of us really liked our results very much so we’re not pitting favorites against one another.  (This is my not subtle way of telling anyone commenting they are free to honestly critique the hell out us on these.)

I debated for a minute if I should post my stairway/firehose photo as HDR since neither of Tabula Rasa’s photos are in HDR.  I decided that since I took it with intention of making an HDR photo that I wouldn’t be bending or breaking any of the non-existent rules of this death-match.   When I first saw the firehose I knew I wanted a photo of it, but feared that with all the white and so little detail everything would be flat and uninteresting.  I chose to use the HDR technique in order to enhance all the little details of decay in the frame but still wasn’t terribly thrilled with the results.  Thus I give you this.

As for my second entry, well, I’m seriously unhappy with the results.  I feel it is fine as a documentary photo, but artistically I took too extreme an angle and I had forgotten about that annoying dust inside my lens that causes orbs to appear in my photos when I shoot on a certain angle to the light.  I had to scramble to “fix” this one and it is not a very good job to say the least.  I rarely ever do much fixing since my personal goal is to do everything in camera and not have to change anything once it is on the computer (excluding HDR of course, I can’t afford the cameras that do that automatically.  Nor do I want one, but that is a whole different topic.)  On to “Please Handrails”! 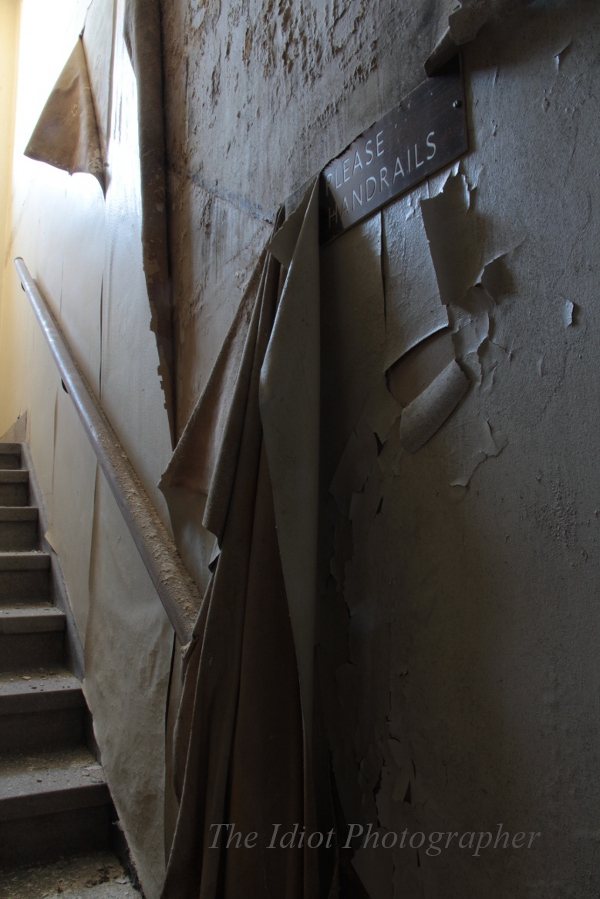 Want to see more Head to Head Photo-off Death Matches?  Want Tabula Rasa to come up with a better name for it?  Please let us know in the comments, and have fun critiquing our modest offerings to you.