In a derelict movie theater, in a room adjacent to the old projection booth, stands this inexplicable high chair. Wherefore, chair?

A Theater in Wisconsin

Three B&W shots from an abandoned theater in southern Wisconsin, including a monochrome take on a shaft of light previously photographed from a different angle in color.

Like Orpheus of Greek myth, we descend into an underworld, impelled by our own dark longings and melancholy. Unlike the ancient hero, we have no lyre with which to soothe and pacify what we may find in Hell, and we know that our Eurydice will never come home with us. We hope only to capture what we see before the lights of the inferno dim and the gates slam closed behind us once again.

All the underworld’s a stage

We left a number of stones unturned on this first haunting explore.
Vintage arcade machines still reside in the lobby (and called out my name),
a cage trap housed a mummified raccoon on the main floor,
and several abandoned vehicles sat entombed in a deep sub-basement below. 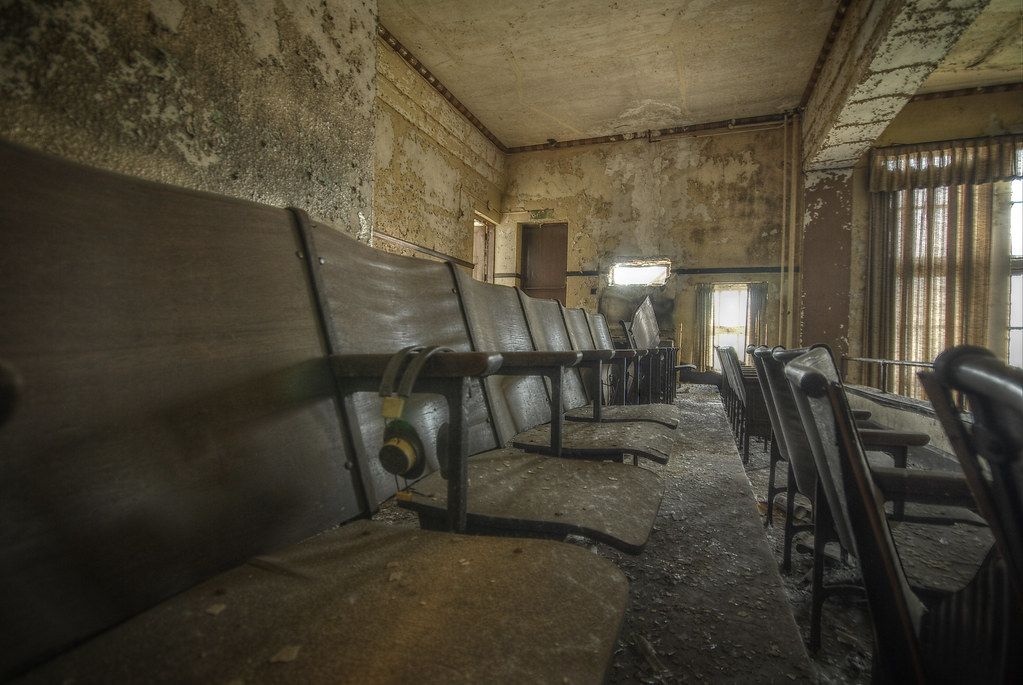 A continuation of yesterday’s post on the Eastown theater in Detroit. The view from the balcony was spectacular, with the solitary red chair on the floor being too perfect a subject to resist.

Most of you that check in on this blog regularly read the news earlier today that my coblogger, the eponymous Idiot Photographer, lost her entire photo collection due to a computer crash. We’re hoping that with some help, she’ll be able to recover much of what’s lost. In the meantime, I feel like the clown that has been pushed out into the ring to entertain the crowd while the acrobat’s gruesome compound fracture looms in the background. Nothing to see there, folks! Look at me. Yuk yuk yuk!
And so,  I present the next stop on our tour of Detroit: the Eastown Theater. Opened in 1931, it was one of the city’s movie palaces, then later a live music venue hosting major acts such as Cream and Jefferson Airplane. Since finally being shuttered in 2004, it’s decay has been rapid, hastened by a fire which took out a section of the building. This is the view that greets the interloper who walks through the lobby into the theater.

The Auditorium at the Methodist Church

Life and Thought have gone away
Side by side,
Leaving door and windows wide.
Careless tenants they!

All within is dark as night:
In the windows is no light;
And no murmur at the door,
So frequent on its hinge before.

Close the door; the shutters close;
Or through the windows we shall see
The nakedness and vacancy
Of the dark deserted house.

Come away: no more of mirth
Is here or merry-making sound.
The house was builded of the earth,
And shall fall again to ground.

Come away: for Life and Thought
Here no longer dwell;
But in a city glorious –
A great and distant city -have bought
A mansion incorruptible.
Would they could have stayed with us!

There are certain places you walk into and say to yourself, “there’s got to be a good picture here.”  They tend to be sites with a lot going on and a lot of possible angles to shoot;  for a very average photographer like myself, it isn’t obvious which to choose. These are pleasant conundrums, as I can spend a long while in such a place trying to find that one “right” shot, the one that captures what it’s like to be there. So it was in the theater department at Mann high school. While I think I came away with a couple decent shots, I’d love another crack at the backstage area. For god’s sake, there’s a disco ball!